Sinking of the Courageous 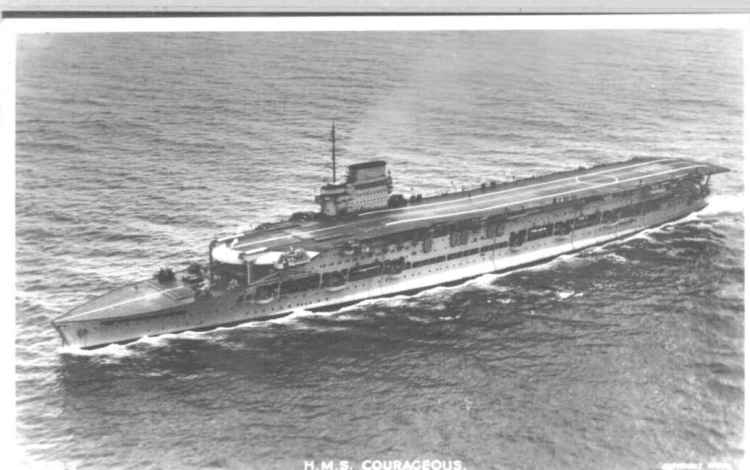 On September 15 1939, a convoy contact was made due west of the English Channel, in an area the British called the Western Approaches. The sea lanes were abuzz with traffic and some successes against British shipping had occurred in the early days of the war. To provide at least some form of protection for these ships, the Admiralty had deployed the old aircraft carrier HMS Courageous with a destroyer escort screen to conduct anti-submarine patrols.

Launched in February 1916 and commissioned in January 1917, the HMS Courageous was originally laid down as a Battle Cruiser,

being converted into an aircraft carrier between June 1924 and May 1928. A hangar and flight deck were installed aft of the hull with the original armament of two twin 15-inch guns being removed and replaced with 4.7 inch anti-aircraft guns. The light armament meant that she had to rely on her screening escorts for protection against surface ships.

When Donitz received word of the convoy contact, he ordered all boats in the Western Approaches to converge on the convoy. That included Otto Schuhart in U-29 and Ernst-Gunther Heinicke in U-53. 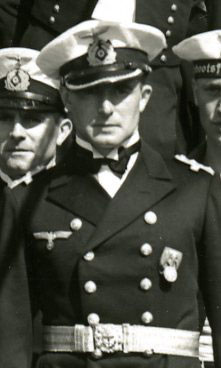 Searching for the convoy on September 17, Heinicke found and attacked the 5,000 ton British freighter, Kafristan with a combination of gunfire and torpedoes. The ASW fleet of the HMS Courageous was close by. Two of her destroyer escorts (out of four) and Swordfish biplanes from the Courageous were dispatched to the area of the Kafristan sinking to hunt Heinicke. 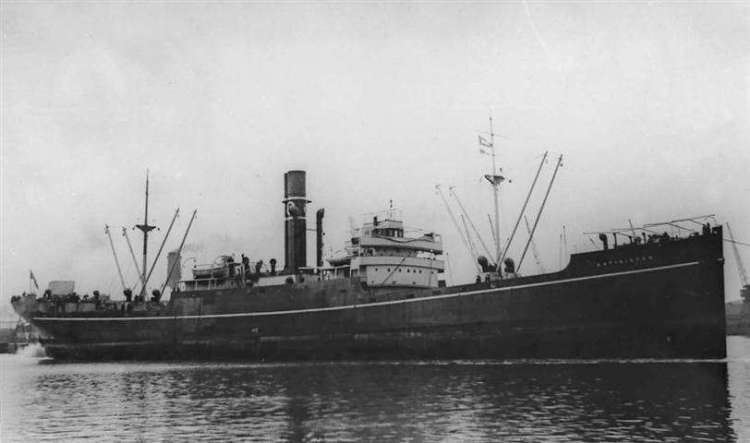 Meanwhile to the east, Schuhart in U-29 was still searching for the convoy. While running submerged, he spotted a Swordfish biplane instead.

A Swordfish 300 miles out in the open sea could only mean one thing – that an aircraft carrier had to be close by. Keeping a sharp watch, at 1800 hours a puff of smoke was spotted on the horizon. It was the carrier Courageous. Schuhart sent his crew to battle stations and adjusted for an interception course.

But he could not mount an attack. Planes were circling over the carrier and the two remaining destroyer escorts were clearly visible. He later wrote in his log “At that time it looked like a hopeless operation. Because of the aircraft, I could not surface and my underwater speed was less than 8 knots while the carrier could do 26. But we were told during our training to always stay close and that is exactly what I did, following him submerged”.

Schuhart trailed on for another one and a half hours, all the while losing distance with the carrier. Then suddenly at 1930 hours, the carrier turned into the wind to launch aircraft, inadvertently placing the ship in perfect position for a torpedo attack. By 1940 hours, U-29 was in position and Schuhart fired all three forward torpedoes from less than 3,000 yards. Schuhart logged “the vast size of the target upset all normal calculations and in any case, I was looking straight into the sun”

Just 500 yards away, while the torpedoes were still making its run, Schuhart observed through his periscope lens as one of the destroyers sailed by, still unaware of the impending attack. To evade, he dived deep – to a depth of 180 feet, the deepest he had ever dived. Then, in the creaking silence of U-boat’s pressure hull, the crew heard two resounding explosions. Two torpedoes had it the target and exploded with such force that Schuhart thought he had been attacked. The crew cheered, although they all knew what was to follow next – an impending depth charge attack.

They braced themselves for the attack and minutes later, one of the destroyers picked up the U-29 on sonar. The second destroyer rushed to the location to join the hunt and both attacked with such fury and ferocity that during the pounding, Schuhart thought he had lost the U-29. The boat reeled and creaked under the force of the explosion which lasted for hours. Then at 2340 hours, the last depth charge exploded. Both destroyers had expended all depth charges and were now weaponless in attacking the enemy down below. Silently easing away, Schuhart in the U-29 made good his escape. As soon as he surfaced, he radioed to Donitz, “Courageous destroyed. U-29 homebound”.

Meanwhile, back at the sinking of the Courageous, a Dutch passenger liner Veendam was passing nearby. 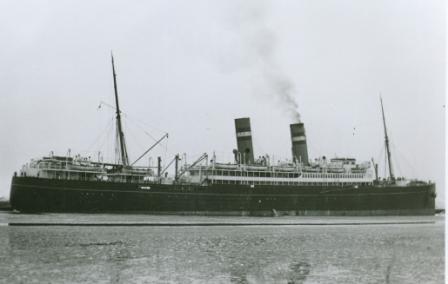 Eyewitnesses account that a huge white cloud had engulfed the Courageous. They thought it was a smoke screen and paid little attention until two tremendous explosions ripped through the carrier. Pieces of steel and dismembered aircraft shot upwards as with the flames and oil slick which soon followed. The Courageous sank in less than 15 minutes with the loss of 519 lives, including her commander Captain W T Makeig-Jones. Her total complement was 1,260 officers and ratings (including air group), and two squadrons of Fairey Swordfish aircraft (48 planes). The Veendam and a British freighter Collingsworth participated in the rescue, fishing survivors from the oily waters.

By the next morning of September 18, news of the sinking had been broadcast worldwide. The sinking of the HMS Courageous was the first U-boat offensive against the Royal Navy, and more importantly, Schuhart’s victory prompted the Admiralty to withdraw all three remaining carriers from the Western Approaches. The first naval engagement turned out to be a resounding victory, as carriers were not to be seen in those waters for another four years.

This was precisely what Donitz had wanted, as the withdrawal of ASW vessels allowed his U-boats to continue with their sinkings unabated. Politically, Hitler was neither pleased nor displeased. He was still hopeful of a diplomatic solution with Great Britain and did not want to further antagonize the Western Powers by sinking a major capital warship. However, no specific orders had been issued otherwise and in fact, the Kriegsmarine was ecstatic. Donitz noted gleefully in his diary “A wonderful success”.

Schuhart was awarded the Iron Cross First Class and the entire crew the Iron Cross Second Class. In tonnage sunk for a single patrol, his tally was 41,905 tons which was to stand as a record high for a very long time.

The U-29 was a Type VIIA U-boat, an oceangoing boat which had four bow and one stern torpedo tube.

Her sister ship, the HMS Glorious and her two escorting destroyers, Ardent and Acasta was to suffer the same fate on June 8 1940, during an attack by two German battle cruisers, Gneisenau and Scharnhorst